Numerous pedestrian areas and bicycle paths have been developed in Rio de Janeiro. There is also a system of self-service bicycles (called BikeRio) present throughout the metropolis.

The Rio de Janeiro bike network is about 186 miles (300 km) thanks to a strong policy to develop the dedicated cycle path initiated by the city of Rio. Many dedicated lanes for cyclists have been built to facilitate coexistence with motorists. Bike routes were created to help people enjoy the city.

Cycling is a means of transportation that is developing in Rio de Janeiro. Bicycle facilities have been built and Rio has reached the 400 km mark of bicycle paths. The most famous of the cycle paths is the Niemeyer cycle path located along the beaches in the southern zone and extending into the center.

The use of cycle paths is also on the rise. Bicycles are everywhere, both in the city and on the beaches. On Sundays and public holidays, on the beaches of Copacabana and Ipanema, half of the roadway on the seafront is closed to traffic and reserved for cyclists and pedestrians only. 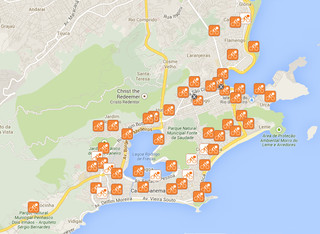 Bike Rio is the public bicycle sharing system in Rio de Janeiro (Brazil) available since 2011. Established by the city of Rio de Janeiro, the system is operated by Serttel and sponsored by Banco Itaú. The network is available in 14 neighborhoods of Rio de Janeiro and proposes a fleet of 600 bicycles spread over 60 stations.

Rio de Janeiro has set up self-service bicycles: Bike Rio (TEMBICI set up by ITAU). ITAU announce today 260 stations and 2600 bicycles.  The use of these bicycles is simple, all you need is a subscription and a card or a phone.