You can find on this page the map of Rio de Janeiro subway. Rio subway, tube or underground is a transit system serving the city of Rio de Janeiro (Brazil) with the urban, suburban & commuter train, the tram, the bus or the ferry. The subway network has 2 lines and 35 stations forming a rail network of 25 miles (41 km).

Rio de Janeiro's metro is safe, economical and convenient (stations are advertised in Portuguese and English). On weekdays, Rio's subways run from 5am to midnight and from 7am to 11pm on Sundays and holidays. During Rio's carnival, the metro runs 24 hours a day.

Line 1 of the Rio metro is called General Osório. This metro line starts in Ipanema and ends in the residential areas of Tijuca. The line passes through the neighborhoods of Copacabana, Botafogo, Flamengo, Catete, Gloria and Centro. Rio's Line 2 serves São Cristóvão, Maracanã and the northern suburbs of Pavuna. 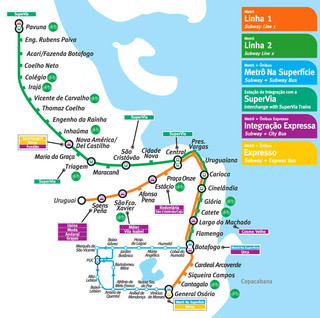 Rio de Janeiro subways which transport 180 million passengers per year, exist since 1979 and are operated by the MetrôRio.

Its network includes the following 2 lines:

Rio's metro is clean, safe and fast. The Olympic Games in Rio made it possible to build line 4 of the metro, which runs through Ipanema, Leblon and goes all the way to Barra. The integration of the metro with a bus system allows the network to be extended to Gávea, Humaita and Jardim Botânico.

Metro cars are reserved for the female public from 6 to 9 a.m. and 5 to 8 p.m. on weekdays. In some stations, you can park your bicycle in indoor parking lots (free and secure). Please note that you can travel with your bike and surfboard in the last car of the metro (after 9pm on weekdays and on Saturdays, Sundays and holidays).